About Our Founder Ken Bollinger

At a young age, Ken Bollinger had his hands in electronics. When he was 12, he studied, passed, and received his amateur radio (ham radio) license. At the time, there were no commercially built transmitters and receivers. Instead, you had to build your own. In order to buy the required parts to build one, he sold his electronic train set. Through ham radio, Ken met his future wife Veloy – who was a sister of one of his close ham radio operator friends. Also while operating his radio, his brothers often told him there was no future in electronics – but he refused to believe it!

On December 7th, 1941, while turning on his equipment, he was told by an FCC transmitter that all equipment was to be turned off and locked up until further notice. In 1942, Ken was called into the special military service and was to leave Salt Lake City for Spokane, Washington. So, rather than leave his sweetheart behind, Ken married Veloy on August 4th, 1942, and left for duty. During the war, Ken worked on B-17 radios at Geiger Field near Spokane and was then sent to New York’s Bell Telephone Labs to learn about radar. He had the great opportunity to study under Harvey Fletcher, the father of the transistor. Fletcher is also credited as the ‘Father of stereophonic sound’ and the inventor of an early electronic hearing aid. After the war, Ken worked at Eimac tube manufacturing, KALL radio, and KSL as a transmitting engineer. At various times, Ken was offered a job by Hughes Aircraft Electronics – three different times – which he turned down so that he could stay and raise his family and establish his business in Salt Lake City, UT.

After moving back to Salt Lake City with his wife Veloy, Ken Bollinger founded TV Specialists in 1953 out of his home going on service calls. Veloy, his wife, was secretary, bookkeeper, and accountant – all while raising three kids. In order to finance TV Specialists, funds were obtained by purchasing 1000s of surplus transmitting tubes and creating a neighborhood production line to melt down and extract a small amount of platinum. The platinum was sold to a jeweler in New York.

For their first logo, a satire of Sherlock Holmes was used; he was called Sherlock ‘Ohms’ – the name of a unit for electrical resistance. Although TV Specialists was primarily a service and repair shop, Ken also taught TV repair classes for RCA in Idaho, Wyoming, Nevada, and Southern Utah. Despite his long hours and many nights – he always found time for family. 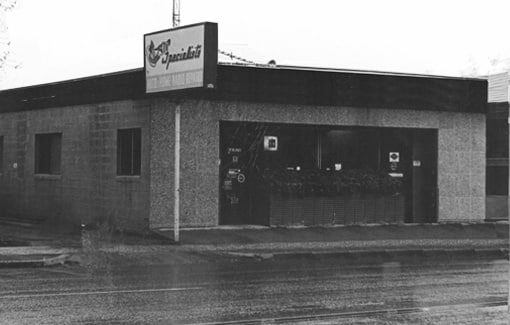 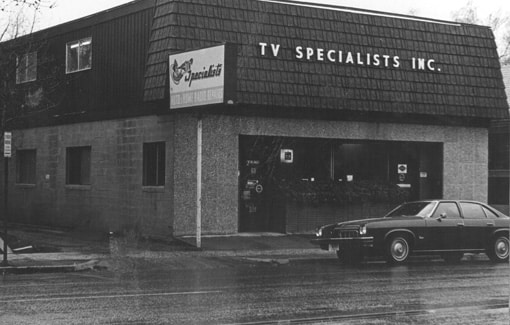 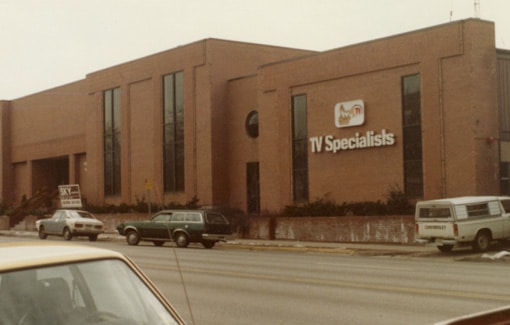 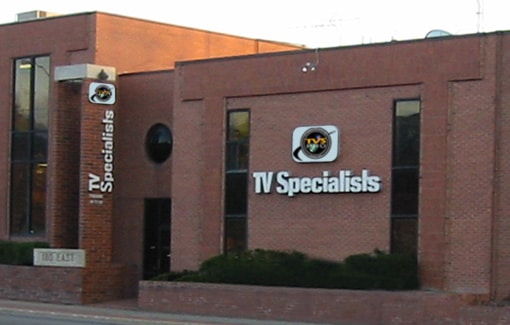 In early 1960s TV Specialists was moved from their home and into a new commercial location on 3rd East and 2100 South, Salt Lake City, UT. Their first privately owned building was bought in 1964 and was located at 170 East 2100 South, Salt Lake City, UT. As color TV was introduced, TV Specialists was approached by company’s such as Panasonic, and began selling audio and video electronics in addition to repairing them. Their first showroom was located upstairs on the 2nd floor of 170 East 2100 South, Salt Lake City, UT. Since then, sales has continued to expand – as has their building. In 2013, TV Specialists, made a new division called TVS Pro to better reflect the changing industry and services it offers. In addition to service and repair, we now provide custom integration solutions, professional video equipment, custom home theater and conference room automation, digital signage, and other audio/video solutions.