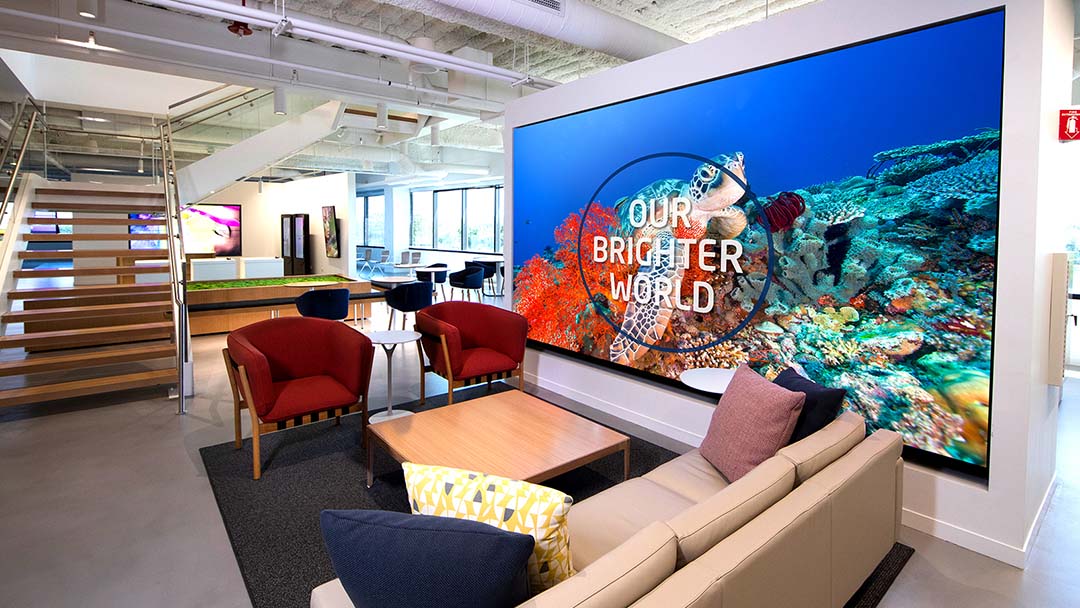 Here, we’ll be focusing on only the emissive display technology, specifically Direct View LED – referred to here as “dvLED”.

Why dvLED is Revolutionary

LED technology is not necessarily “new”; however, due to advancements in technology, we are able to provide solutions that have previously required architects, engineers, and general contractors to provide a single video display.

Another advantage of LED and/or dvLED is its brightness and contrast. As mentioned, LED, and dvLED displays are an emissive technology. This provides images that are brighter and higher in contrast than the transmissive technology of traditional LCD displays or other transmissive displays. This also allows for a wide viewing angle, and helps overcome nearly any ambient lighting condition.

Before we talk about the types of dvLED, let’s define a pixel, and what the term “pixel pitch” means.

LED: A light emitting diode (LED) is a tiny, electronic semiconductor that converts electric energy into visible light. The chemical compound used within an LED determines its color, brightness and power efficiency. Each full color pixel in an LED display is comprised of 1 Red, 1 Blue and 1 Green LED.

Pixel: A “pixel” consists of a group of individually mixed colors that combine to represent a colored element. This pixel, when mixed with other pixels, combines to make an image. In a dvLED display, each pixel consists of a physical Red, Green, and Blue LED.

Pixel Pitch: The “pixel pitch” is the physical measurement of an LED cluster, the pixel’s center, and the distance between the adjacent pixel’s center. This distance is measured in millimeters. The smaller the distance between each LED pixel, the more pixels on the display to create the image. This increases the display’s resolution allowing for more detail to be seen in the image. This clearer image allows the optimal viewing distance to be shorter.

Primarily there are 3 main types of LEDs used in large dvLED displays – with a few very specific differences between the technologies that define how large or small their physical size can be.

Let’s assume we have a digital billboard, with a standard 14’x48’ dimension and a pixel pitch of 20mm for an overall resolution of 208 pixels x 720 pixels. While this resolution may seem low for such a large image, the distance a viewer is from the content is more than adequate to display the image.

Why Are Different LED Solutions Important

The primary factors in deciding which technology is right for you are 1) pixel density – the number of physical pixels within a given area, and 2) the overall cost. As we start to integrate dvLED displays in a professional AV environment where closer viewing is required, we must decrease the pixel size and increase the pixel density. Reducing the pixel size will increase overall resolution, making the individual pixels smaller and harder to see, therefore making the picture more clear. These two factors (pixel density and cost) are directly related: as your pixel density increases, as will the cost of your display; as your pixel density decreases as will the cost of your display.

As shown above, there are different types of LED solutions: DIP, SMD, and COB. They each have a different pixel pitch.

DIP LEDs, for example, reach a physical limitation as you reach a 10mm pixel pitch. The same can be said for SMDs but at a much smaller pitch of roughly 0.9mm. COBs can achieve pitch beyond 1mm pitch, but the cost increases dramatically. The primary dvLED solution offered today is SMD technology, as there are varying pixel pitches from 0.9mm to 3.5mm 3.5mm to 0.9mm at a reasonable price point for the entire solution.

What Pixel Pitch Do I Need

10x Rule: Average viewing distance (in feet) should be around 10x the pixel pitch. While this estimation is not precise, or to be used when designing your system, it will give you a great base to achieve budgetary numbers.

Here’s why: Pixel pitch (in mm) is multiplied by 3438, which is a scale factor of one arc minute for a person with 20/20 vision.  Then, once those numbers are multiplied together, we divide it by 304 which converts it from mm to feet.

Don’t worry.  If this doesn’t make sense, just know that the 10x Rule is based on the formula: (Pixel Pitch (in mm) x 3438)/304 – which ends up being roughly 10x. Similarly, to get the rough range, just multiply the minimum and maximum viewing distances and multiply them by 10.

If your primary viewers are less than 9 feet, or in a specialized application where there is an increased requirement for contrast, you may need to explore using COB LEDs as your display type. See Figure 4 for an example of a COB LED. Even though the physical pixel size is under 0.1mm, the pixels themselves are spaced out to allow for an increased black level when no signal is present. This solution is well suited for cinema applications, analytical data, screening rooms, and many other applications that require a high level of image accuracy.

Regardless of which type of LED technology that is used, there needs to be a way to get the content from a generic video standard, such as HDMI, DVI, or SDI, to a signal that your LEDs can interpret. For this, an LED controller is necessary.

While some manufacturers have developed their own solutions, the most widely used products are developed by NovaStar. A NovaStar processor will take your video signal, and give you proprietary CAT6 data feeds to send to your pixel cards. These pixel cards are stacked up, through cabinets, that house the components needed to drive your LEDs.

Figure 5: an example of a dvLED cabinets in a 135” configuration without any populated pixel cards

Some applications may require you to show a single image, multiple images, or even picture-in-picture layouts. For these applications, the addition of third party components such as matrix switchers, scalers, or video wall processors may be required to ensure your dvLED wall can display the image – or images – correctly and appropriately to fit your needs. While this type of processing is not a native feature of the video wall or dvLED controllers, it is definitely a possibility when designing your entire solution.

In summary, even when discussing Direct View LED (dvLED) there are multiple options to choose from. Its long-lasting lifespan and cost should not be the only consideration. Other features such as viewing distance should be considered when deciding what pixel pitch and density will work best for your needs; a way to interpret a standard signal and display a picture how it’s wanted is also needed.

Call us today at 801-486-5757 (M-F 9am-6pm) for more information on Direct View LED displays and to discuss what solutions and services TVS Pro can offer you.