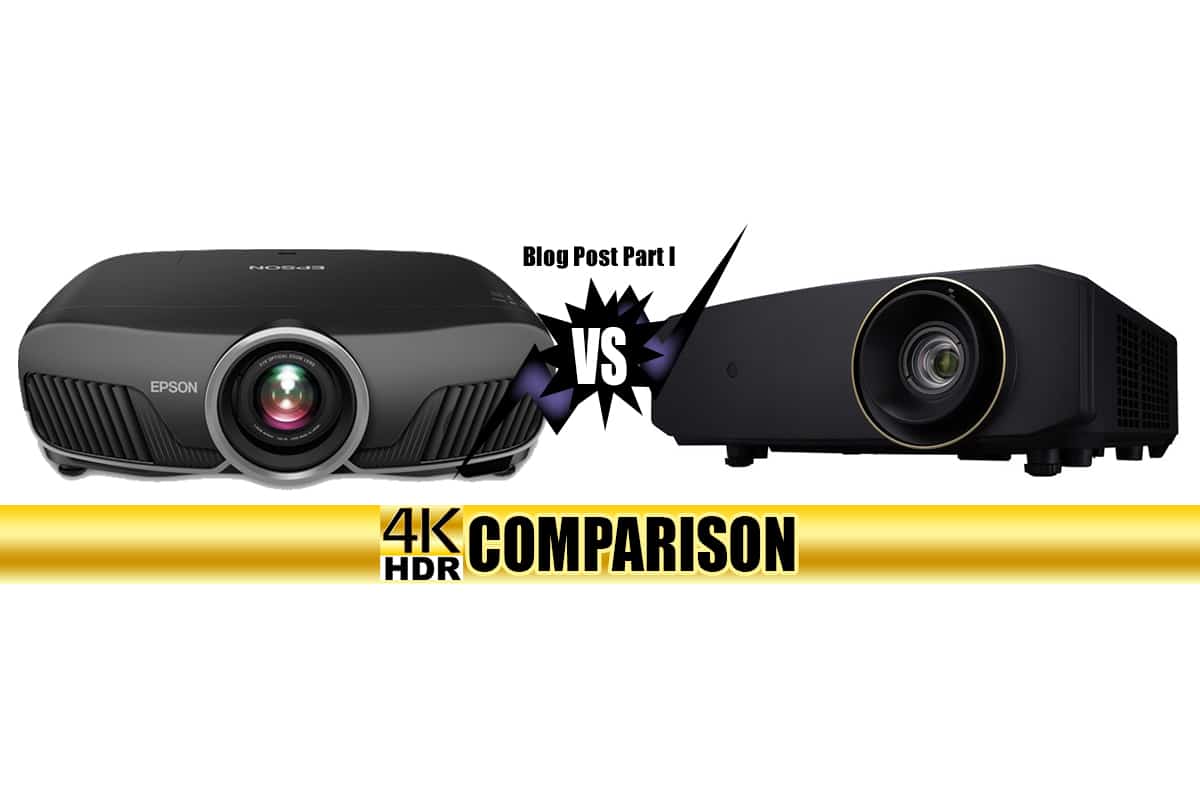 Why We Wanted To Do This Comparison

JVC has earned a reputation for some of the best blacks in the home theater space with its DILA imaging chips, while Epson has a very respectable reputation with its “UB” (Ultra Black) series of LCD projectors. So where does this 2nd generation, 4K DLP projector fall in terms of black levels, and is its laser light source really brighter than the Epson top-of-the-line lamp projector? What about color – how does the JVC LX-NZ3 DLP laser compare to the 3-chip LCD Epson Pro Cinema 6050UB design? How effective is the JVC auto HDR tone mapping? Let’s find out. 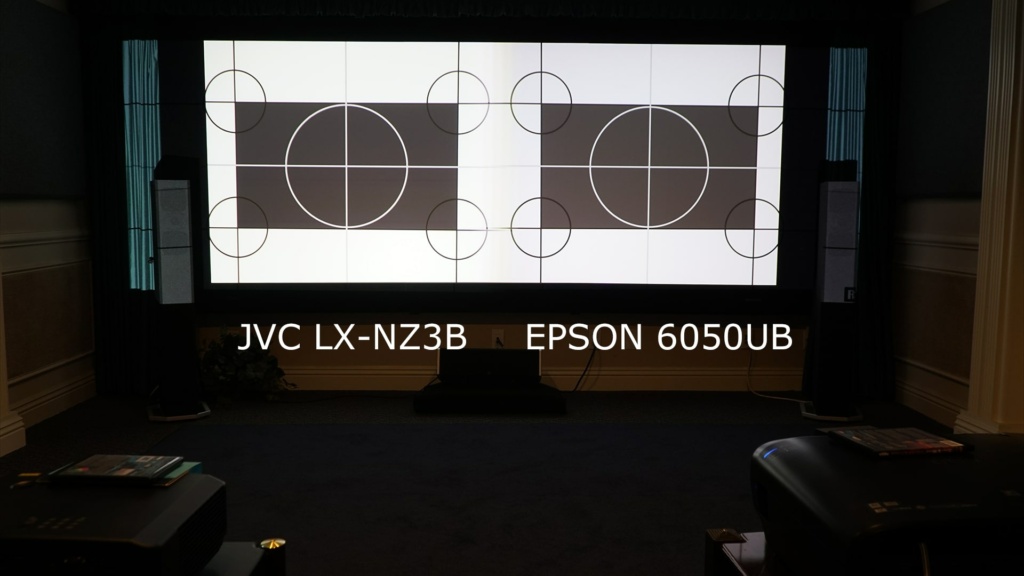 Both projectors set up side-by-side in our demonstration room so we can simultaneously see both images with the over-lapping of image in the middle blocked on each projector.

One of the key specifications usually compared, when looking at home theater projectors, is the brightness rating. Unfortunately, the brightness rating on most manufacturer’s spec sheets does not reflect the actual “usable brightness,” if good, or at least respectable, color accuracy is also taken into account at the same time. It also does not always reflect the zoom position of the lens, or the average light output after the projector has a few hundred hours of actual usage on it. We have also seen some manufacturers under-rate their light output to help position their step up models and help justify the higher price.

The one way we have found to at least give an indication of the light performance is to compare the projectors at the same distance of a typical home theater setup, at the same image size, and with the same content. First we tested the HDR maximum brightness with individually calibrated settings using both calibration test signals and color meters so the white balance was at D65 (the industry standard). 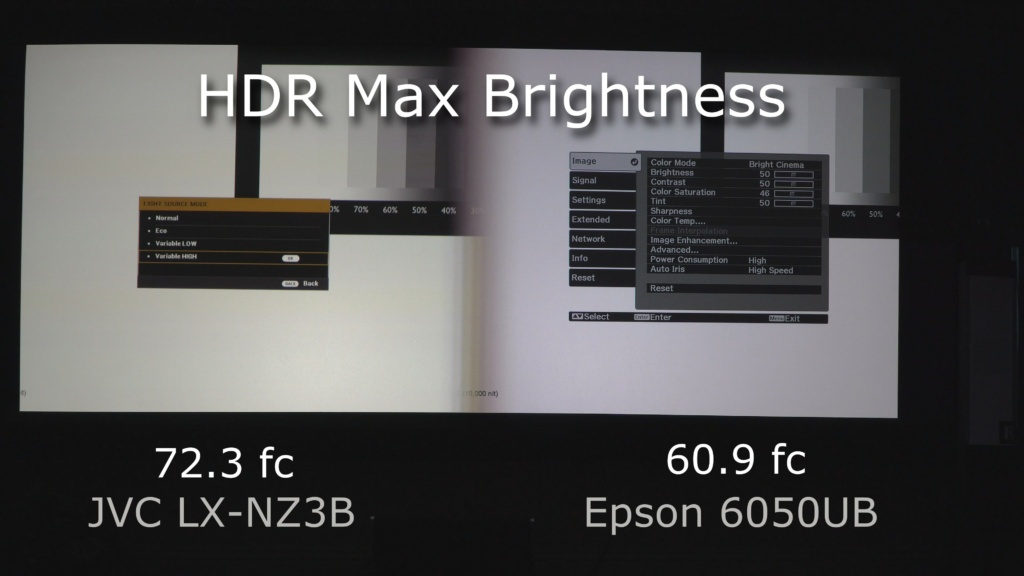 Even though the white point (D65) was calibrated within a few degrees of each other, the camera still shows a slight difference which was not evident in person. Here, the JVC LX-NZ3, with its laser, had a slight advantage in terms of 4K HDR overall brightness. 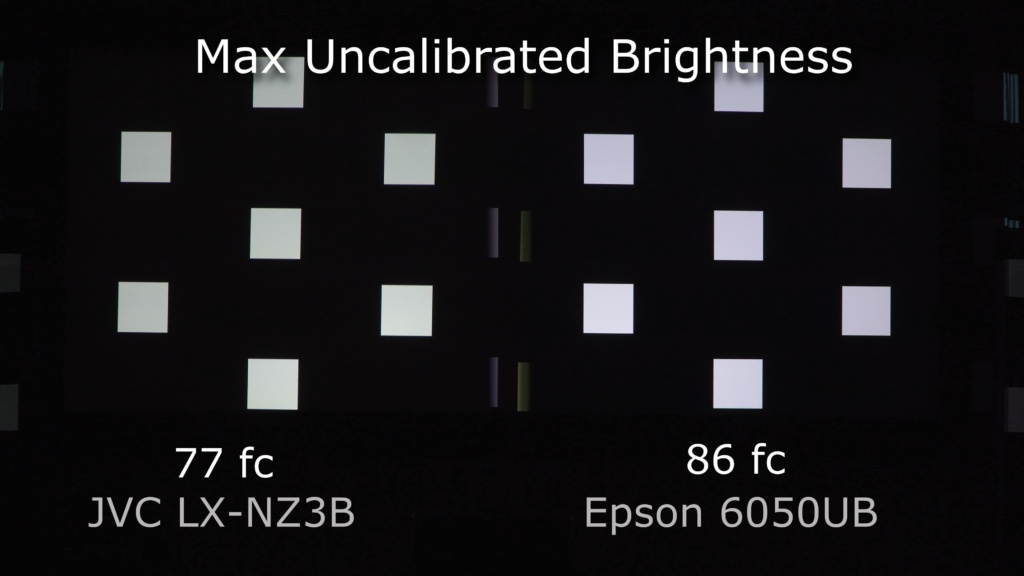 Here, with both projectors in their brightest and non-HDR mode, surprisingly, the Epson (rated 400 lumens less than the JVC) was actually brighter than the JVC. This mode would normally only be used in a bright “lights on” environment due to the less color accurate images. 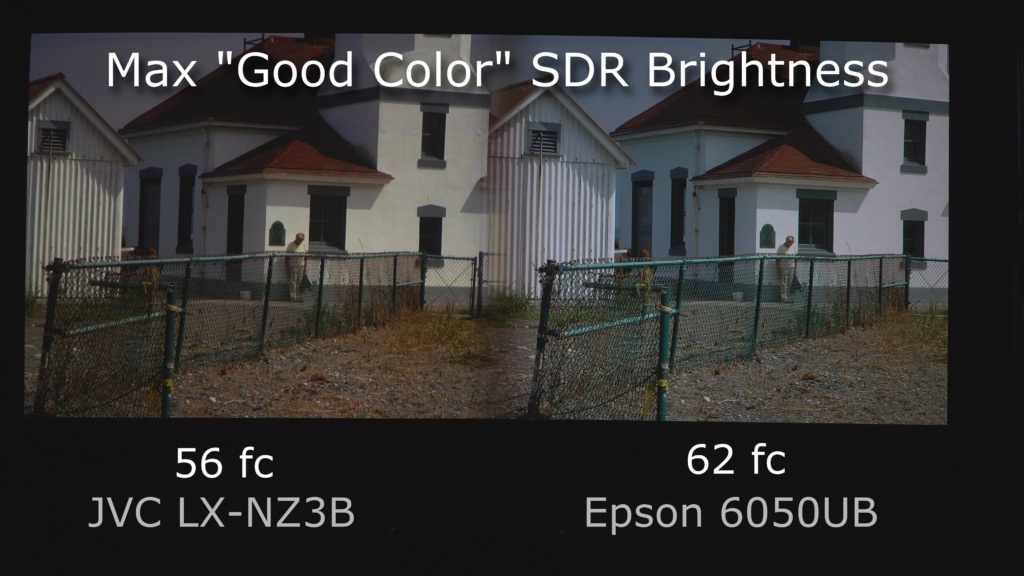 Since the JVC LX-NZ3 gave us its best blacks and very respectable sound levels in the “Variable Low “mode at 51 fc, while the Epson Pro Cinema 6050UB provided better lamp life in its “Middle” lamp position at 48 fc, this gave us comparable HDR brightness, and we used these settings for most of our HDR color and performance comparisons since we want to compare images in similar brightness.

One of the common misunderstandings of HDR brightness is that we need at least 1,000 nits of brightness before a projected image can really compete with the HDR performance of a 4K flat panel display. If both were viewed in a brightly lit room that might be true but they are not. In order to have good contrast and the best blacks, projectors are usually watched in a more subtle lighting environment or even in a completely dark theater like environment. In a dark environment the human eye will increase its sensitivity to light by 1,000 times or more due to a chemical in the eye called Rhodopsin. Once the eye has adjusted (usually 5-10 minutes) brightness higher than about 30 to 35 fc actually hurts us to watch and is very uncomfortable. So, depending on your screen size and gain, either of these projectors should provide all the light you would want for good SDR and HDR up to 150″ in most typical controlled light environments.

Good white temperature (D65) along with accurate color beyond REC 709 is one of the key differentiators for the new generation of 4K HDR projectors, and one of the areas worth comparing when considering a projector. Accurate color ensures that the director’s intent and feeling of a given scene, or overall tone to a movie, is preserved and conveyed. The color gamut is the pallet, or range of colors, that are available and able to be displayed. The wider the color gamut, the more closely it comes to recreating reality (what we see in nature). It is not the color saturation, but the color itself.

The easiest color for most people to see is red. While most traditional TVs and many projectors portray red as kind of an orange-red, a wide color gamut can give us a very deep, rich red like we see in a red rose or brilliant red sports car. The other colors that become more noticeable with wide color gamut are the greens, yellows, and cyans or teal colors. The adoption of 4K UHD HDR Blu-ray discs, with their wide color capability and 10-bit gradation, has opened up a new era of quality home entertainment, and in some cases, even exceeded many of the commercial movie theaters. The goal of wide color is called BT2020 and is a new standard which most 4K HDR displays are now trying to reach (in the higher end models). Since the BT2020 standard is not currently easy to reach, there is a motion picture standard called DCI P3 which is being used by most studios to grade inside the BT2020 standard.

Both projectors did a very good job of covering the REC709 color gamut, and this level of color is the standard for HD Blu-ray and HD broadcast signals (8-bit).

The full REC709 color standard for HD can look very good and often times is mistaken for wide color gamut if brightness and contrast are also present, as a very good image can be portrayed. The reality is that most current TVs and many projectors do not even do the full REC709 gamut, so when we see it done properly we are often times fooled into thinking it is wide color. Both these projectors did a very good job of covering, and in some areas exceeding, the REC 709 standard.

Here, the true wide color of the DCI P3 standard can be seen as the colored triangle; the Epson was able reach a higher level of that gamut.

As you can see in the above charts, the Epson Pro Cinema 6050UB, with its color filter in place (digital cinema), extends the red, green, blue and cyans to a richer and more accurate P3 color gamut. This extra color comes at a price, however. We found that in taking the Epson Pro Cinema 6050UB to its maximum lamp mode (HIGH) it could not equal the JVC LX-NZ3 in its lowest mode (Variable Low). In fact, because the side-by-side images looked so different (in terms of brightness), the color filter against the JVC LX-NZ3 actually made it look worse. We did find that putting the Epson Pro Cinema 6050UB in the Middle lamp mode and Bright Cinema mode gave us a very good side-by-side comparison, even though we were giving up some of the wide color. If you have not watched the online video when we did this, you may want to take a look and see what you think as we do show it both ways. Here is the link.

Whenever you want to do a side-by-side comparison of color and contrast, you really want to have the projectors as close as possible to the same brightness. With the color filter off in the Epson Pro Cinema 6050UB, and the JVC LX-NZ3 in the variable low laser position, we were able to then do a good series of actual comparisons. Had the Epson been able to keep its brightness up with the color filter in place, many of the scenes might have looked better, or more vibrant, than what we saw here. That being said, it should be noted that lamp-based projectors will lose even more in brightness in the first couple of hundred hours of use by as much as 20-30%. So the option of using the color filter in this lamp-based projector would be even less of an option over time if higher brightness was needed. 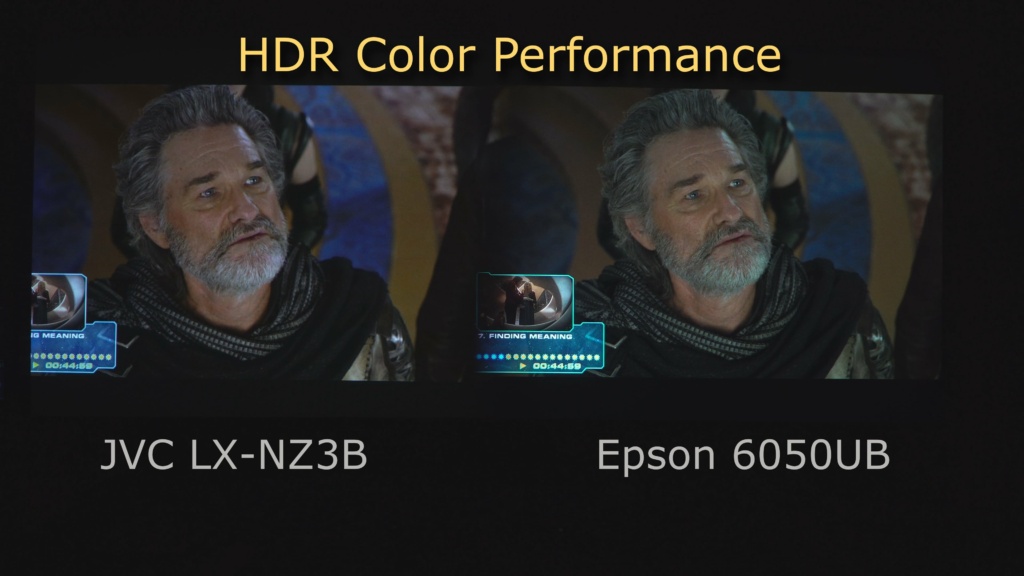 Both projectors did an excellent job on skin tones and most colors, even with their less-than-full-DCI-P3 capabilities. The Epson color filter was off as can be seen above in this scene from Guardians of the Galaxy II.

In addition to color and brightness, it is the contrast and black level performance that really separates the better home theater projectors. This is especially true if the projector is to be used in a dedicated home theater environment. JVC has made it clear, both in their literature and in their public demonstrations, that they are positioning this little laser projector as a “living room” or “media room” projector. Why? Well first, they already have really good dedicated home theater projectors (like the NX5 and NX7) with excellent blacks and contrast. Second, unlike the above projectors, which trade off brightness for contrast and blacks, the LX-NZ3 has a much higher light output capability so it can be used with some lights on. With almost any amount of ambient light, blacks are no more. Even with a good ALR screen design, deep rich blacks are just not the same with some light hitting the screen. 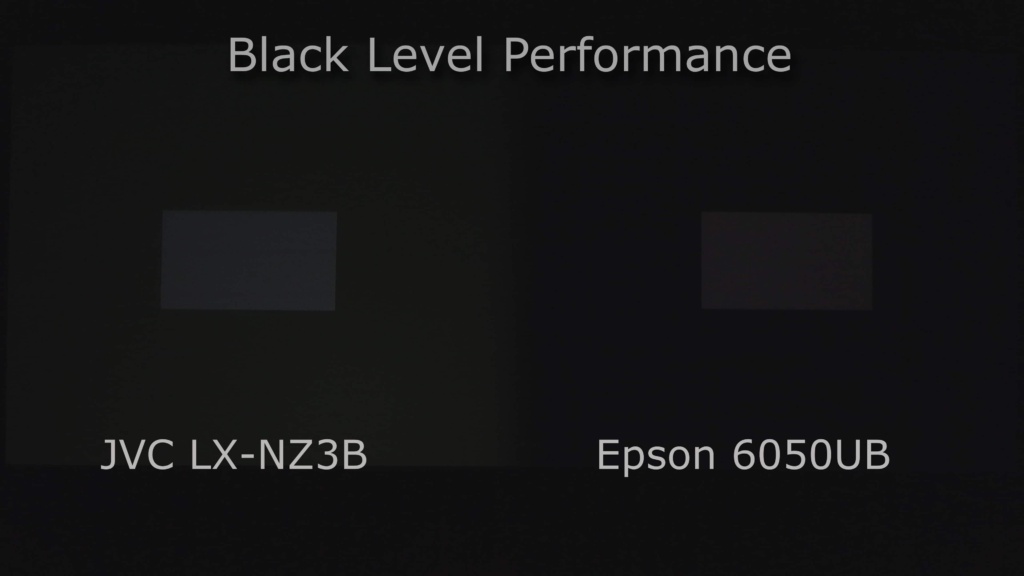 Once scene levels are low like this 30% dark chip in the center, the background of grey, or “floor,” as it is sometimes called, becomes very noticeable. 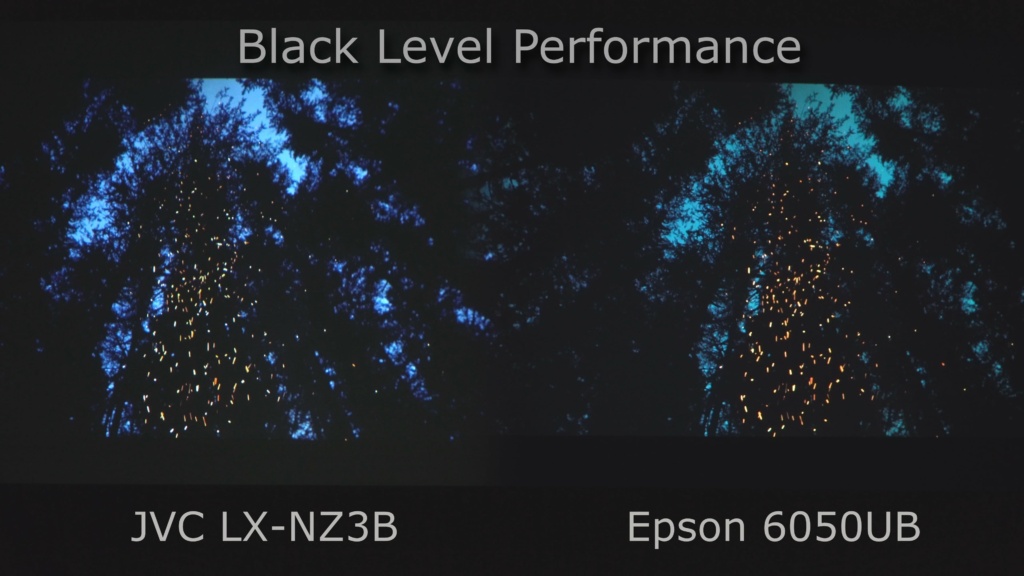 If you look carefully underneath the image on the left, you will see the grey bars which are very noticeable in person. This scene and the one below is from The Revenant. 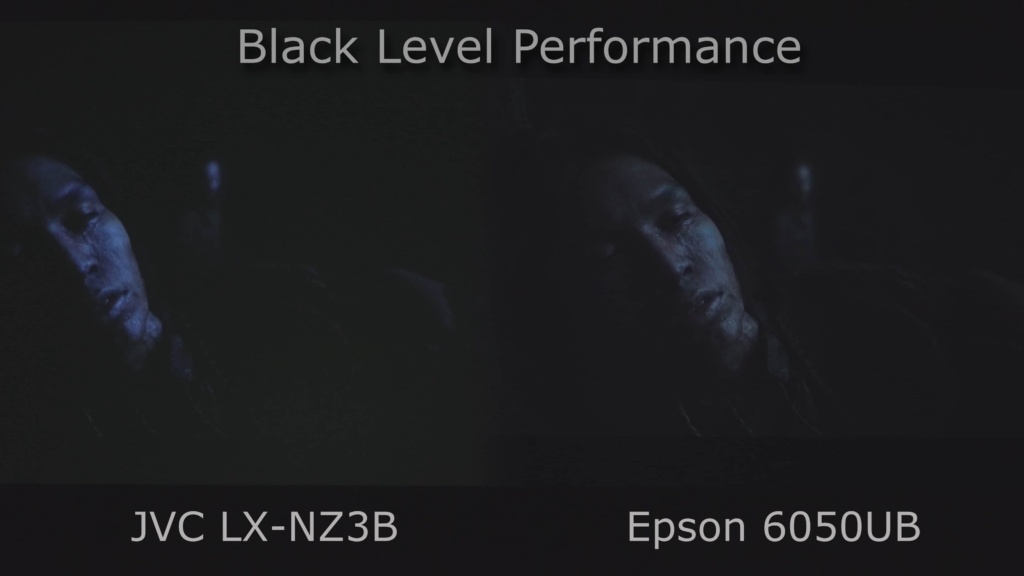 Here it is very interesting as the Epson definitely has the better blacks, but the JVC seems to have more contrast as seen in the brighter face.

Overall, even though the JVC LX-NZ3 could be used in a dedicated theater environment, the Epson Pro Cinema 6050UB (with its better blacks) or the JVC DLA-NX5 (with even better blacks) may be a better choice – unless the same projector will also be used with lights on. In that case, the LX-NZ3 or Epson Pro Cinema 6050UB would be the best choice due to their higher light output.

Ted Bollinger has been in the professional display and electronic imaging industry for over 40 years. He has worked with and consulted with most major manufacturers' engineering representatives of professional and consumer flat screen TVs and projectors.
← JVC DLA-NX7 vs TVS Pro Theo-Z65 Lite with Kris Deering - Part II
JVC LX-NZ3 vs Epson Pro Cinema 6050UB Projector Comparison Part II →