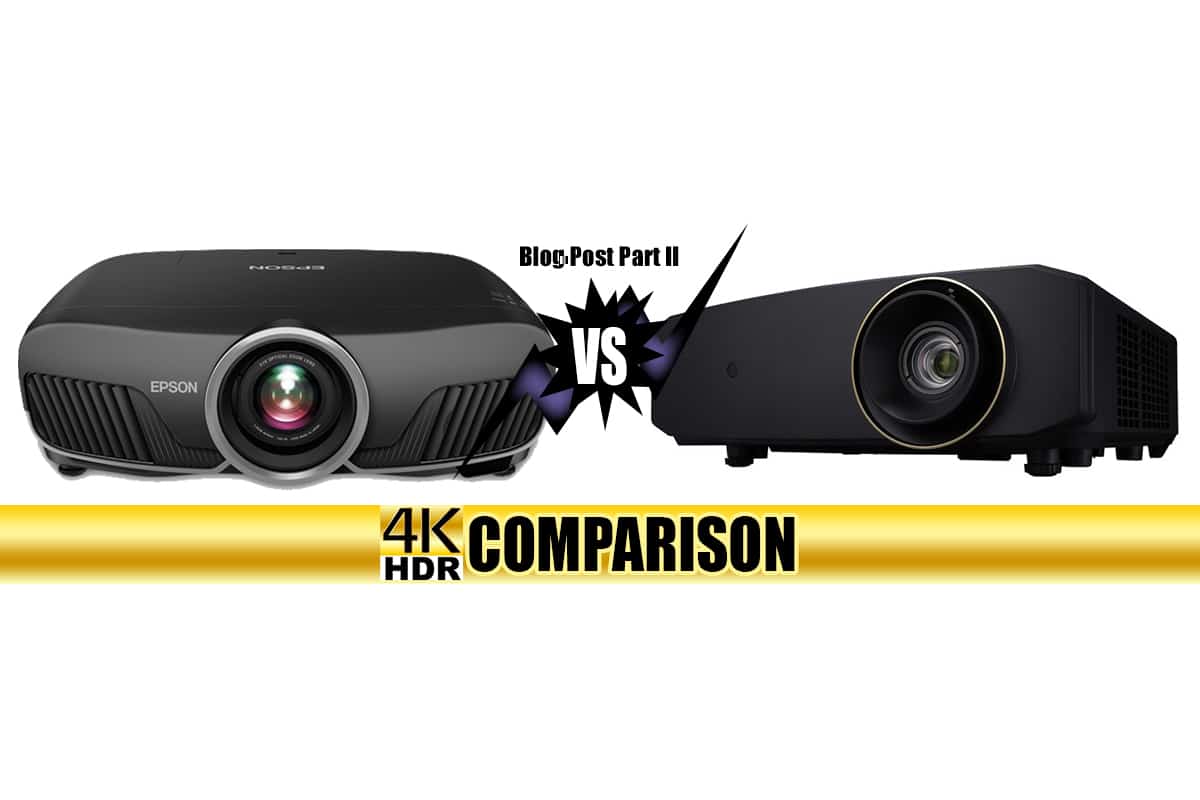 If you have not read the first part of this blog, which covers the main differences between the projectors, light output & brightness, color performance & gamut, and black levels & contrast, you may want to go back and read it first. Read it here.

This was probably our biggest surprise in this comparison. Knowing that the JVC LX-NZ3 is using a second generation .47 DLP chip, and the Epson Pro Cinema 6050UB is using its 4K enhancement, we thought for sure the little JVC would look significantly better in terms of fine detail and actual resolution. This is not the case even though it technically can resolve more detail in a resolution chart at viewing distance – you simply cannot see the difference. We concluded that this is mainly due to the JVC lens. Although we love the fact that it has both horizontal and vertical lens shift, it is not a super sharp and chromatic aberration-free lens. No real difference for HD but for 4K, the JVC LX-NZ3 should have had the advantage. 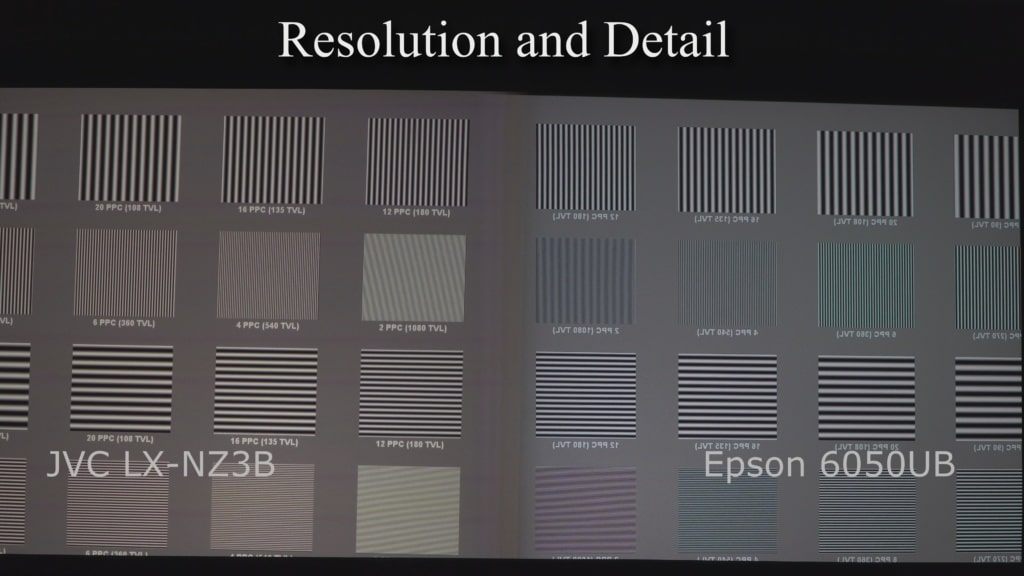 Here is a wide view of an HD resolution test signal. As the lines get smaller, the blacks become more gray and the whites become less white (depth of modulation). 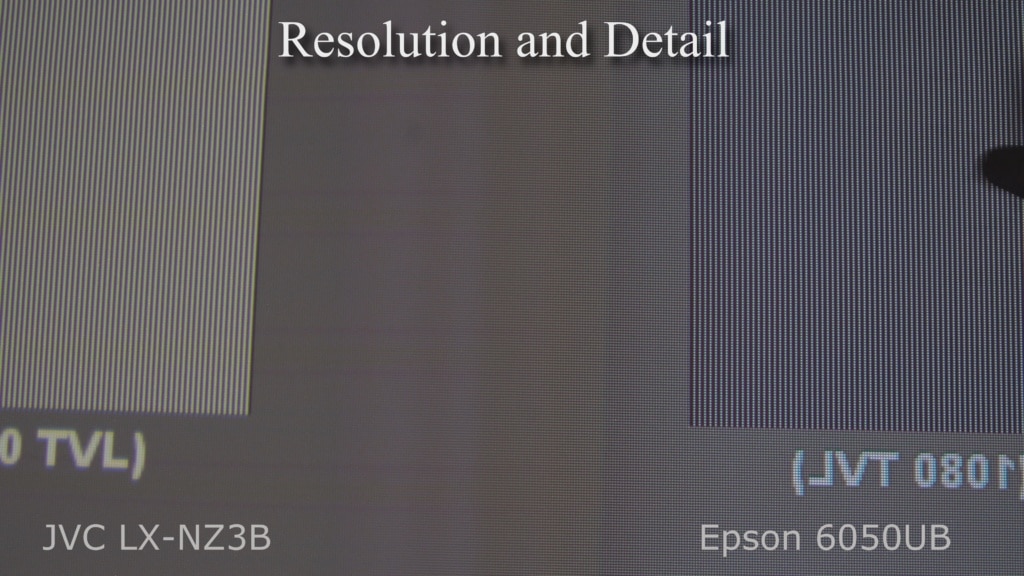 Both projectors with their 4K shift disabled. Somewhat different, but both very good. Pixels are visible in the lettering of TVL on both. Note: The Epson image is reversed so both images can be seen close up on the same part of the image. 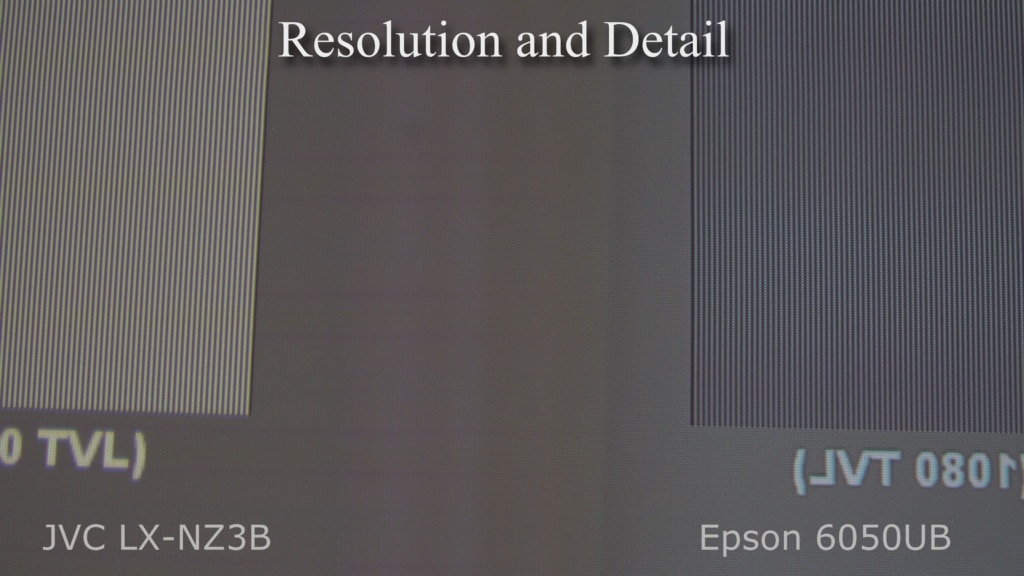 Both projectors now have their full 4K shift engaged. Notice that, even on this HD test image, how much smoother and cleaner both images are. Both do an excellent job of HD Blu-ray images and are significantly better than dedicated HD projectors. 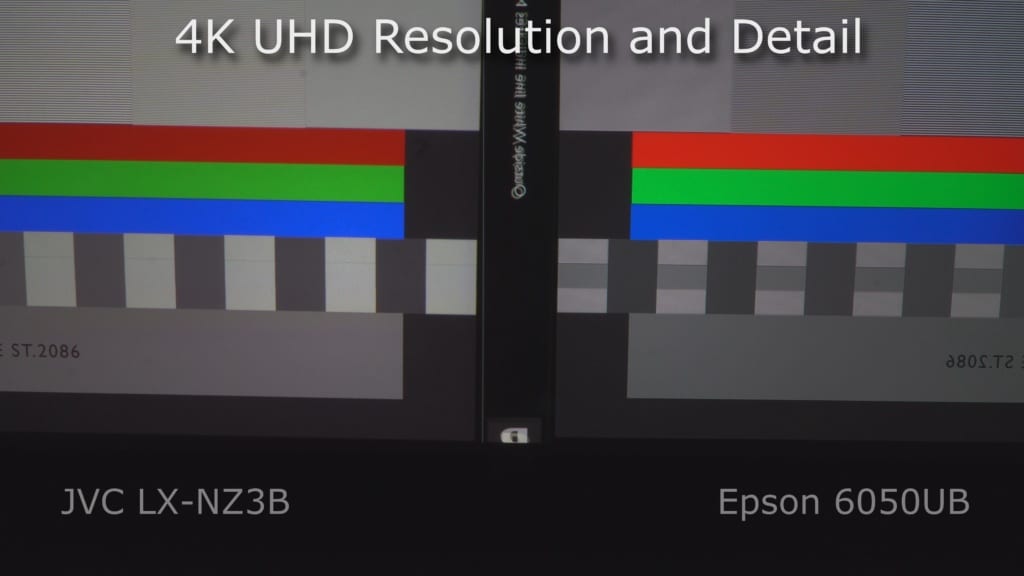 This is the section of the 4K test image where we can compare very fine technical resolution down to the single pixel level. 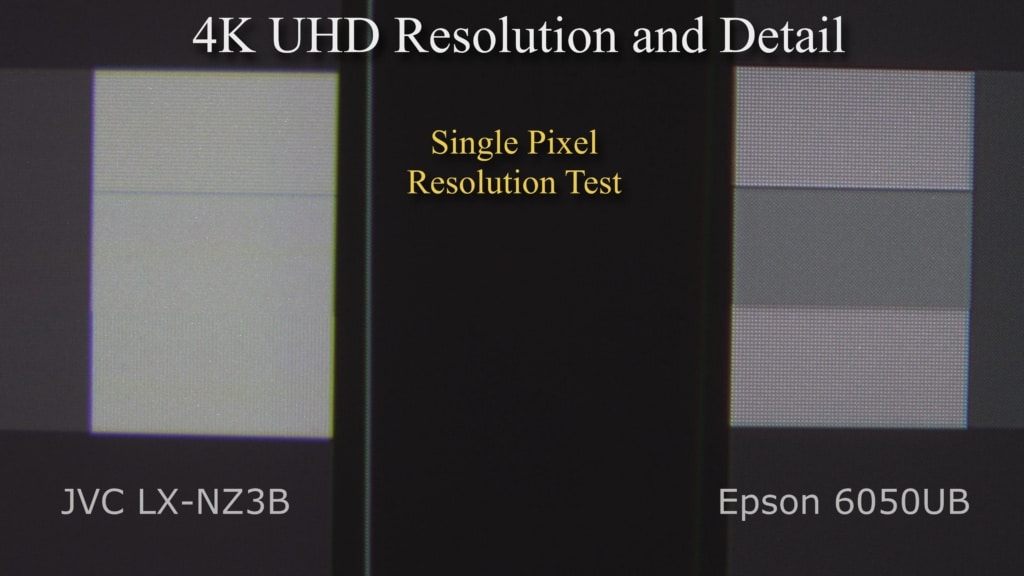 This closeup shows what our eyes can see in person. The JVC with its 8 million pixels hitting the screen can just barely resolve the top left horizontal lines and the bottom left vertical lines. The Epson, due to its LCD “fill factor,” cannot resolve single pixels in 4K UHD images (4 million pixels). 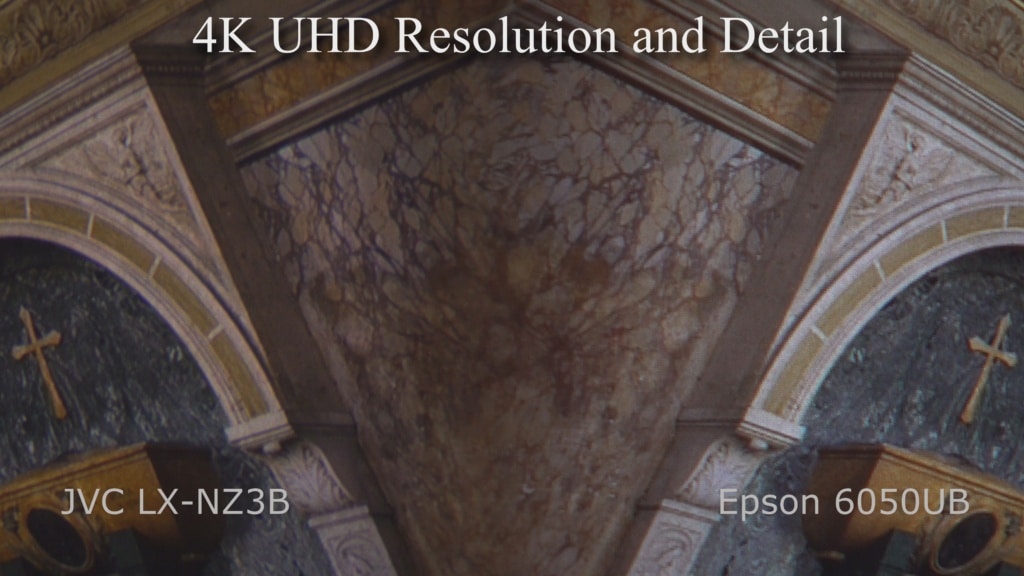 Here it is possible to see the smoother, and technically more accurate, JVC compared to the Epson 4K enhancement. Both look almost identical at viewing distance.

Next to really amazing color, the best thing that is even more noticeable to most people is the increase in dynamic range that HDR can provide. With a good 10-bit source and well-implemented HDR grading it is now possible to deliver over 12 stops of dynamic range. To put that in perspective, traditional 8-bit HD video can only deliver about 9 stops if everything is perfect. Dynamic range is the tonal values from deep blacks all the way up to brilliant whites, and all the values in between. Like wide color gamut, it is one more step in creating that “almost real” image.</> 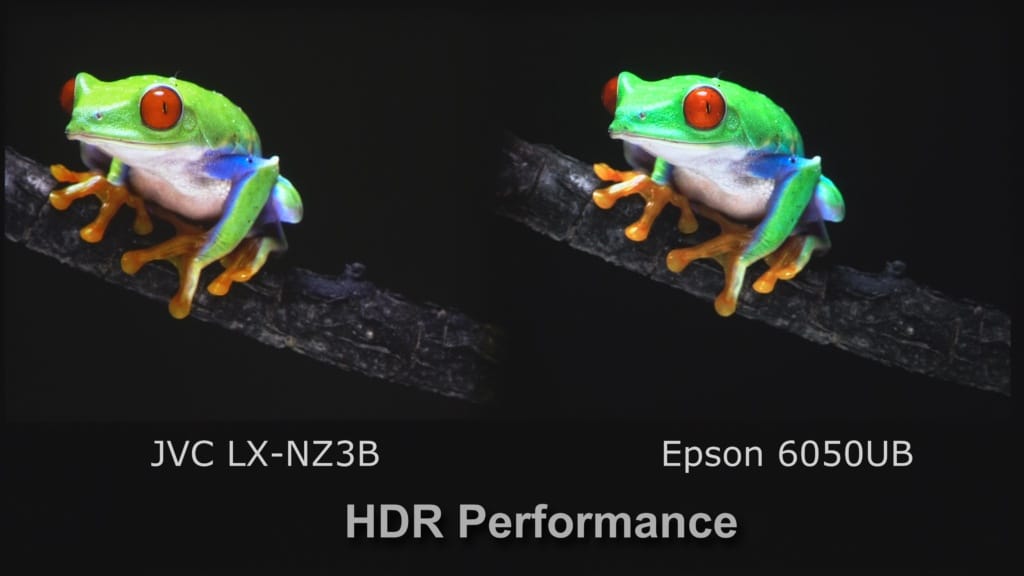 One of the challenges of HDR (High Dynamic Range) is that there are not standards, in terms of levels, for the entire industry yet. That means that one studio may grade a movie at 4,000 nits (like The MEG) and another at 1,000 nits (like Guardians of the Galaxy II). The first generation of projectors from Sony, JVC, and Epson were known for their dark images in the 4K HDR modes. Fortunately through firmware updates and HDR processing refinements this has greatly improved. The challenge is that to accurately portray the highlights, the mids and low levels were dropped, and thus the images seem to appear too dark. One way to get around this is to use dynamic tone mapping to look at each scene and then set the levels for the best possible image. Neither of these two projectors have that capability. The JVC LX-NZ3, however, does have auto tone mapping which does look at the meta data of each disc and then sets its levels accordingly. Both projectors have some manual control, but their range is very different. 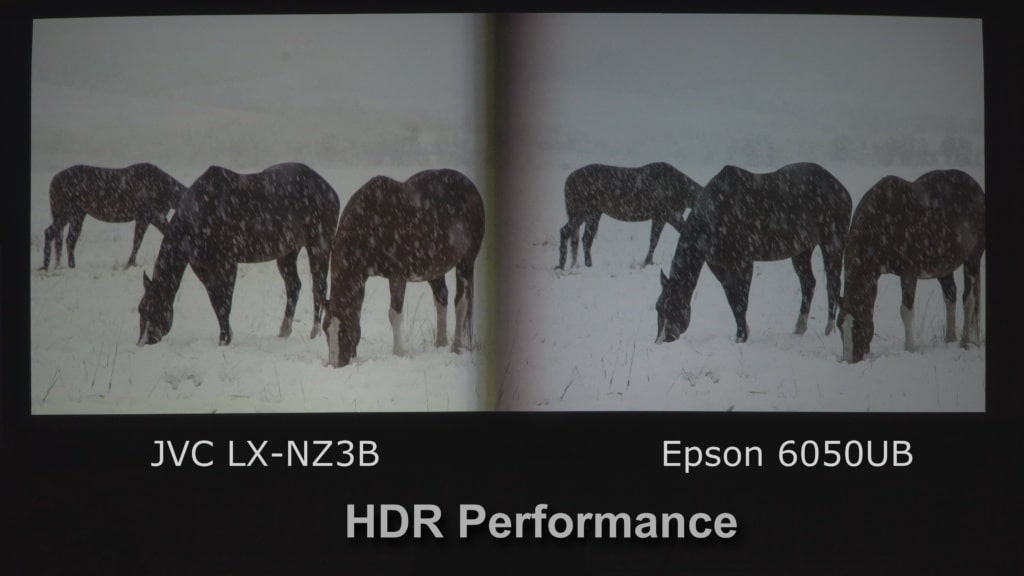 HDR test at 1,000 nits. Here the JVC, using its auto tone mapping, does a slightly better job of the trees in the background than the Epson. 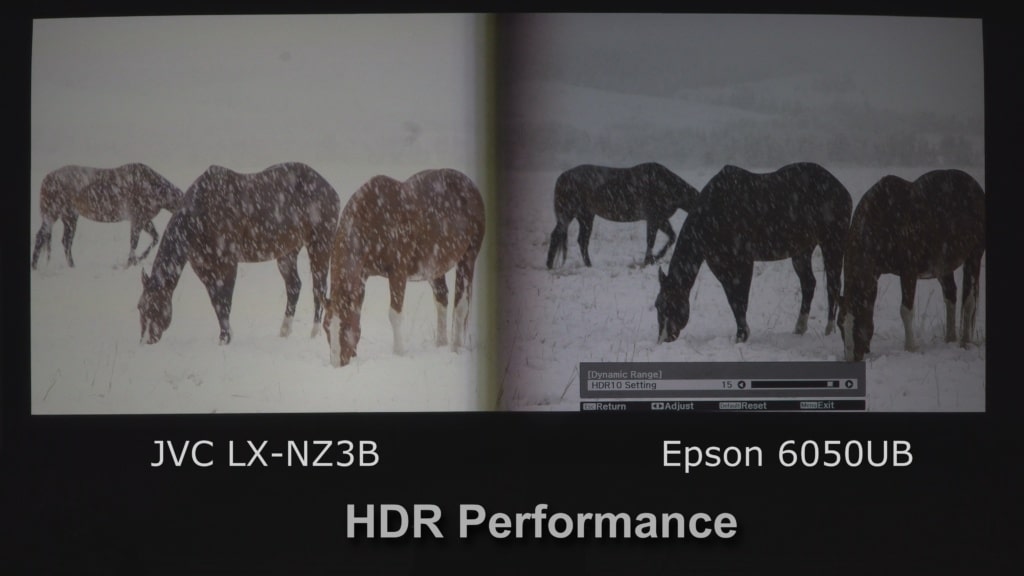 At a 4,000 nit HDR image, both lost most of the tree detail, but the Epson was able to have more manual control to help resolve the trees. At that point, however, the rest of the image became very dark.

After making several comparisons with both test images and actual discs we concluded that the JVC LX-NZ3, with its auto tone mapping, gave a slightly better overall image on most scenes, while the Epson Pro Cinema 6050UB had more manual control for those willing to get into menus and make those adjustments. Overall, both could reproduce a very dynamic and impressive 4K HDR image from most sources. 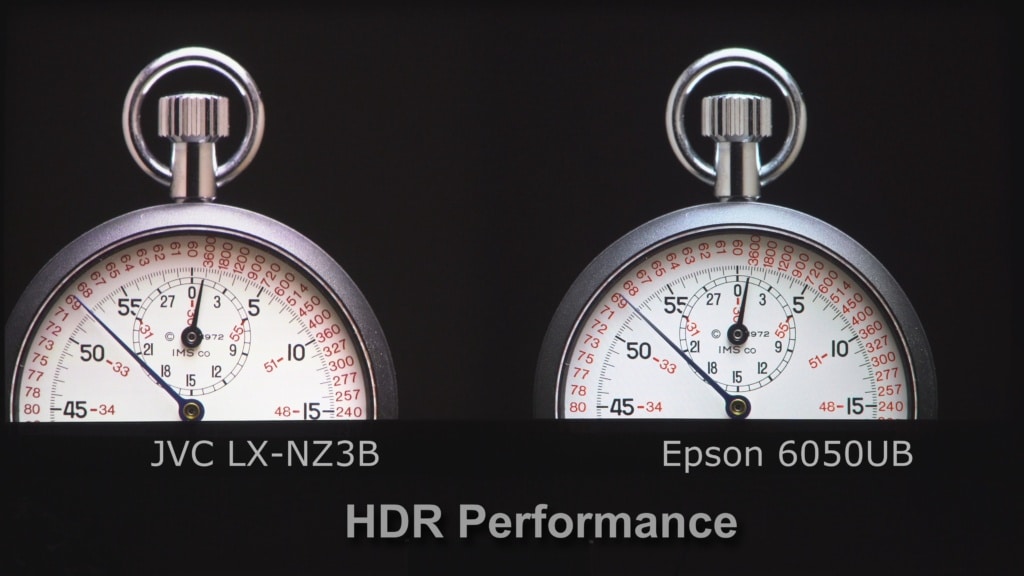 Here you can see how close these two images can appear. The JVC, with a slightly brighter image with its auto tone mapping, and Epson with its slightly better blacks.

One of the things we like best about doing these comparisons, to help our potential customers have more information to help them decide which projector is best for their application, are the little surprises that we find during the process. We did not expect the projectors to appear to have the same sharpness and detail as they did. We also did not expect the Epson Pro Cinema 6050UB to have such a drop in brightness with the filter that even in high lamp mode it could not equal the variable low mode of the JVC LX-NZ3. In the case of these two projectors it is really a case of what your application is as to which is best for you. If you are into 3D, 2.35:1 aspect screens, or enjoy competitive gaming – the Epson Pro Cinema 6050UB is the clear choice. If you do not want to worry about lamp life and lamp replacements (lamp anxiety), then the JVC LX-NZ3, with its 20,000 hour laser, is the clear choice. If none of those situations fit yours then it might be a little more difficult to decide. They both will do a great job in a room with some light on but if you enjoy a dedicated home theater with little or no external light then the choice is better blacks with the Epson Pro Cinema 6050UB or longer life and no maintenance on the LX-NZ3. 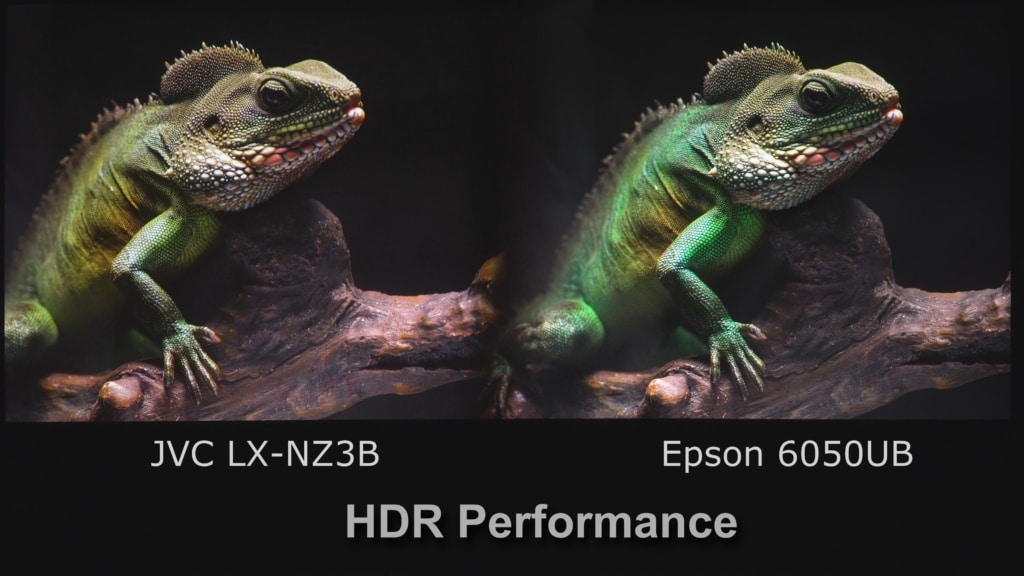 We were very surprised at how close these two very different technologies were able to come in terms of 4k UHD HDR image reproduction. 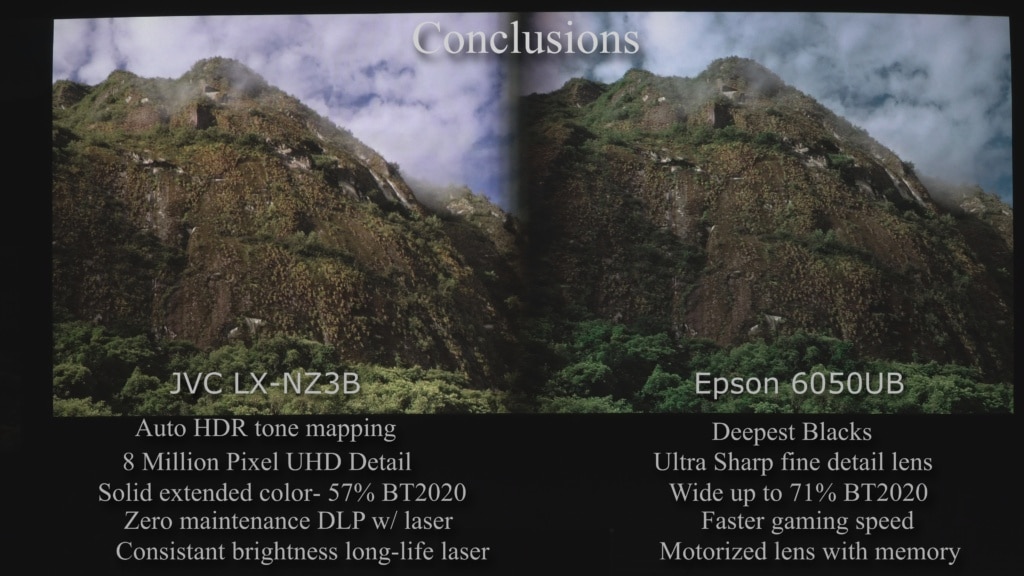 Slight differences can be seen in some scenes but unless you were to see them side-by-side, other than the deepest blacks in the Epson, it would be hard to tell a difference.

Here are the Theo-Charts to go with each of these projectors. To view other projectors and compare their Theo-Charts side-by-side visit Projector Comparison Charts 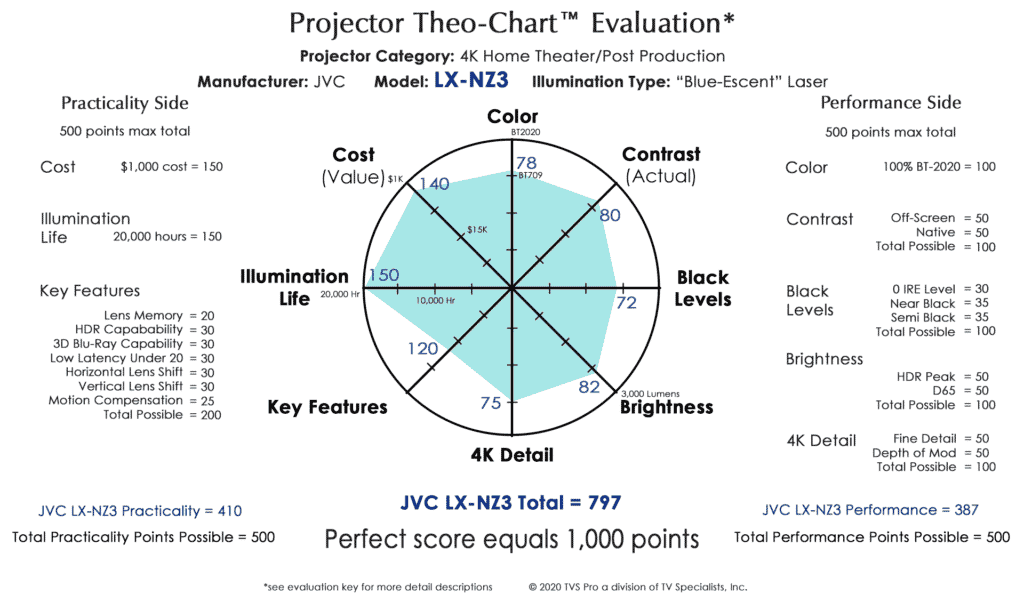 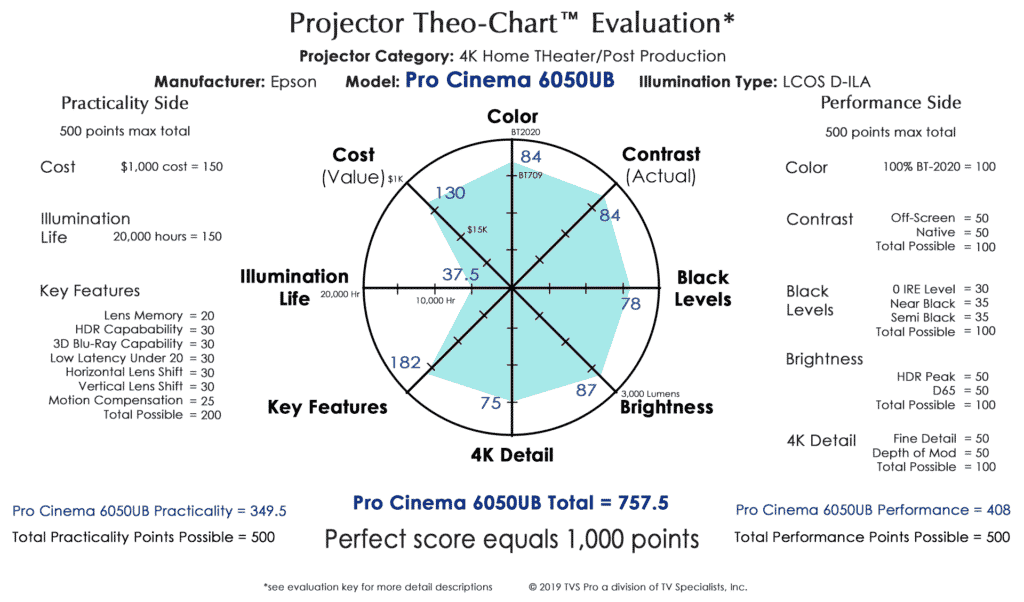 See our other Theo-charts and compare additional projectors!

Ted Bollinger has been in the professional display and electronic imaging industry for over 40 years. He has worked with and consulted with most major manufacturers' engineering representatives of professional and consumer flat screen TVs and projectors.
← JVC LX-NZ3 vs Epson Pro Cinema 6050UB Projector Comparison Part I
COVID-19 Notice →